Project LifeSaver
BAYSAR president Stan French explains the Let’s See You Wear Your PFD survey in front of the search plane that will be flyng over Lake Nipissing, Trout Lake and Lake Nosbonsing this weekend.

BAYSAR president Stan French explains the Let’s See You Wear Your PFD survey in front of the search plane that will be flyng over Lake Nipissing, Trout Lake and Lake Nosbonsing this weekend. PHOTO BY LIAM BERTI

If you’re out on the water this weekend, don’t be surprised if you see a float plane moving in for a closer look.

On Thursday morning, BAYSAR Search and Rescue announced that they are teaming up with the North Bay Police Service and the Ontario Provincial Police to survey how many people are wearing personal flotation devices over the Civic Holiday weekend.

“This year, we want to see if there have been any improvements,” said BAYSAR president Stan French, who was joined by North Bay Police and OPP officials in front of a BAYSAR float plane on Trout Lake.

“We want to promote water safety, but at the same time we’re evaluating the efforts by the police and other types of agencies to try and get people to wear their PFDs.”

The lifejacket awareness initiative, Let’s See You Wear Your PFD, is the second time the forces have carried out the analysis, which will produce a report in the weeks to come. The crew will be flying over Lake Nipissing, Trout Lake and Lake Nosbonsing and will be collecting data according to boat type.

BAYSAR is also using the opportunity to bring more public awareness to the dangers of boating without a lifejacket, reinforcing the message that lifejackets save lives.

“There’s certainly enough information out there for people to realize that if you’re not wearing your PFD, then you’re at greater risk of drowning in an accident,” French continued.

The study comes at a time when PFD use in the area has come under immense public pressure thanks to some devastating accidents.

“Hopefully we’ll be seeing some improvement, because the tragedies that we’ve had on the water lately are certainly evident that people don’t have time on a small watercraft to be able to say ‘an emergency is coming and we need to put on our PFD,’” said French.

French says that even though boaters seem to have a general sense of risk analysis on a windy day, for example, it’s the unforeseen accidents that no one can prepare for.

“What people have to recognize is, each time they go onto the water, you’re not always able to recognize exactly what the risks are,” said French. “The more people that recognize that they will not have time to put on their PFD if it’s sitting in the boat when an unexpected emergency happens, the better their chances will be of surviving.”

French said it would be beneficial to see legislation that would require boaters in small, open watercraft to wear a PFD, whereas those on larger closed-in boats, such as the Chief Commanda II, need not wear them at all times. French likened it to people driving a car being required to wear a seatbelt, while passengers on a bus don’t have to.

According to the organization, their goal is to make PFD use as common a practice as wearing a seatbelt every time you drive a car. And, in case you’re wondering, French and the rest of the BAYSAR crew are required to have PFDs onboard the search plane too.

“Nobody plans to have a boating accident, so just take that extra step and put it on,” said OPP Const. Carolyn Ward. “We try to get the message out; what people do with that message is up to them.”

Currently, everyone on board a vessel must have a PFD, but they’re not required to wear them at all times. French said if someone goes overboard, BAYSAR can have a crew in the air within an hour of being notified.

Finding them if they’re not wearing a PFD, however, could take much longer.

“We wanted to see whether or not we would be effective in being able to search over the water for a lost boater,” French explained. “We found out that, yes, we can effectively see people either in or on the water, if they were wearing their PFDs.”

BAYSAR, an all-civilian volunteer organization, is a search and rescue unit that is on standby 24/7 for both air and ground searches as requested by the North Bay Police Service and the Ontario Provincial Police.

The unit consists of 15 members and has been in operation for over 20 years, earning numerous accolades along the way. Most recently, BAYSAR has been called upon to assist in finding those guilty of casting illegal fishing nets in Lake Nipissing.

The long weekend operation also coincides with the Canadian Safe Boating Council’s “Operation Dry Water” campaign, which brings awareness to the dangers of drinking and boating.

According to police statistics, roughly 40 per cent of boating-related deaths in the country stem from impaired boating. 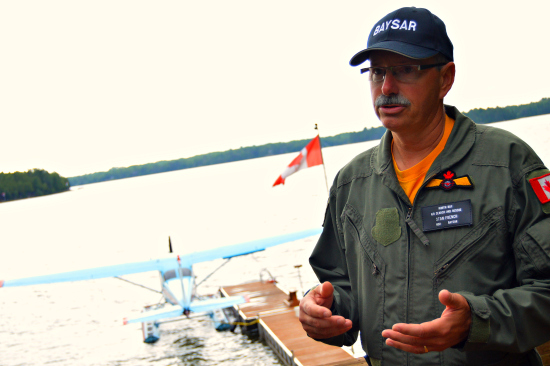