Project Lifesaver could be up and running in the North Bay area by the fall.

But Stan French, president of Baysar, says it will be slightly more costly than originally expected because of the beating the Canadian dollar has taken compared to the U.S. buck.

The North Bay Police Services Board agreed last week to get on board with the project.

The project involves fitting people prone to wander – people on the autism spectrum and those with Alzheimer’s disease – with tracking devices that will enable them to be found quickly.

“It’s wonderful,” French said of the police board’s decision. “They saw the benefit right from the beginning, but there were some questions that had to be answered before they could give it the green light.”

French approached the board in December seeking support for Project Lifesaver, a non-profit organization that was founded in 1999 in the United States. It has since been adopted by many police services in Canada, including in Sudbury and Sault Ste. Marie.

Caregivers can enrol loved ones in the program and provide information to the project – in this case Baysar – which shares the information with police searching for the missing person.

Those enrolled will be fitted with a wristwatch-sized transmitter that can be worn on either the wrist or ankle. Each transmitter has its own frequency, and can transmit up to a distance of five kilometres.

If the person wanders away, the family can call 911, where operators will pass on the pertinent information – including the frequency of the transmitter – to trained searchers.

According to the Project Lifesaver website, the service has successfully located and returned 3,652 people to loved ones.

Baysar would serve as the umbrella organization for the program locally, working with city police and the Ontario Provincial Police. As part of that, Baysar has became part of the Ontario Search and Rescue Volunteer Association, the governing body for volunteer search and rescue teams in the province and serves as the liaison between the OPP, volunteer SAR teams and other emergency organizations.

French said letters of intent must still be prepared and signed by North Bay police and Baysar to ensure all policies and procedures are in place “before we get up and running.”

As well, he said, fundraising efforts are in the works to raise the $23,000 necessary to purchase the necessary equipment.

Before the Canadian dollar’s slide, the price tag had been just under $22,000, he said.

But the Rotary Club of North Bay-Nipissing has already jumped in to assist, providing $4,500 for the program from proceeds from charity bingos at Blue Sky Bingo, where Baysar also does the bulk of its fundraising.

“So if there are any other service organizations that are looking for a good home for their proceeds, we would be quite happy to talk to them,” French said.

Initially, he says, the local Project Lifesaver will look to purchase 24 transmitters and three tracking devices.

He says the first batch of equipment necessary for training can be purchased by June, and “once the initial training is done we can start to get referrals from clients,” the Alzheimer Society and One Kids Place.

At the same time, French said, Baysar is looking for new members, both for Project Lifesaver and its regular operations assisting in search and rescue operations.

Those who volunteer for Project Lifesaver, he said, ideally will have skills working with people with special needs, such as retired nurses or health-care providers.

In his presentation to the police services board in December, French said families enrolled in the project could receive assistance in paying for the transmitter, which costs about $500 each.

Stan French, President, BAYSAR Air Search and Rescue will be the guest speaker at the noon meeting. Stan will also be talking about Project Lifesaver (PL) and the efforts to bring the technology to North Bay and area.

The local CTV news, Sudbury police and North Shore Search and Rescue (who put on the demo for BAYSAR Sep 25) recently did an exercise involving PL. You can read the story and see the video here: https://northernontario.ctvnews.ca/mock-search-and-rescue-training-exercise-1.4656910

BAYSAR has the same type of collaboration in North Bay between BAYSAR and the North Bay Police Service. 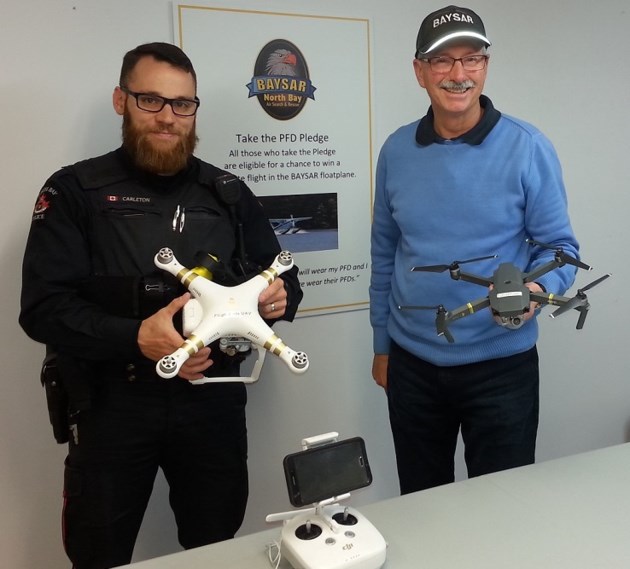 City police will now have a more effective tool when they are called upon for search and rescue assignments.

They have partnered with BAYSAR, a local volunteer search and rescue team, to incorporate drones.

Cst Steve Carleton met BAYSAR members to review the use of the drones during a recent joint training exercise. NBPS Emergency Response Team and BAYSAR set up the search scenario near the Kate Pace Way in Callander.

“The North Bay Police Service and BAYSAR Air Search and Rescue have worked together under a written protocol since 2006,” says North Bay Police Chief Devine. “The volunteers in BAYSAR have demonstrated a high degree of professionalism during joint training exercises and actual search and rescue operations. We are quite pleased that BAYSAR has been able to add drones to enhance our search and rescue capabilities.”

“He is fully licensed to operate his drones under Transport Canada rules and he has the knowledge and experience to fit right in as a great addition to the BAYSAR team of volunteers,” explained member Stan French. “With drones, we can increase the probability of detecting people or objects when searching confined areas with partial obstructions. Bush areas are challenging when searching for people from an aircraft and time consuming when searching on foot. Kym’s drones can be programmed to look for specific colours if the missing person’s colour of clothing is known.”

If the drone identifies the colour, searchers can quickly go to the location provided by the drone.

“This doesn’t replace the need for ground or air assets but it is a very welcome addition to our toolbox,” added French

At approximately 5:25 pm Ron Leach spotted evidence on the north shore of Trout Lake in an uninhabited area that required a more in-depth search
Sep 17, 2018 10:00 AM by: BayToday Staff 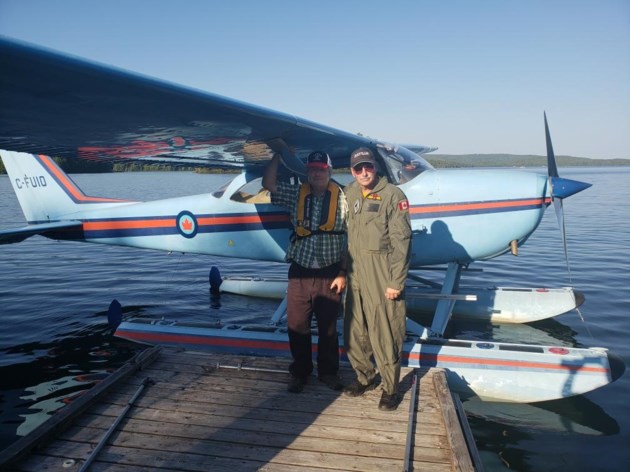 On September 13, police were involved with a search for the teenager. Two BAYSAR aircrew members, Stan French (pilot) and Ron Leach (spotter) participated in the airborne search that centered over and around Trout Lake. Seven other members of BAYSAR were available and were placed on standby in case a ground search was required.

The initial call requesting assistance came at approximately 3 p.m. After a pre-flight briefing with the OPP Marine Unit at 3:30 pm to coordinate search efforts the BAYSAR float plane took off at 3:45 pm.

Pledge will be coming soon!!!

Urs Riesen was the lucky recipient of a flight in a float plane with Stan French, President of BAYSAR. The
actual winner of the random draw was Ur’s wife, Rebecca, who transferred the flight to Urs as a Father’s
Day gift. Both Urs and Rebecca had taken the PFD Pledge during the OPP sponsored Launch to Safe
Boating event that was held June 1. The Pledge read, “I pledge that when boating I will wear my PFD
and I will have all those in my care wear their PFDs”.
As we enter the Canada Day weekend boaters are reminded that having the required PFDs in the boat
isn’t enough; they need to be worn to save your life.
BAYSAR volunteers will be in the air periodically this weekend and available to assist the OPP SAVE Team
if required.